A short historical outline of the former inn Goldener Anker, called Niederschänke, in Radebeul near Dresden (according to old sources and documents of the city archive Radebeul) 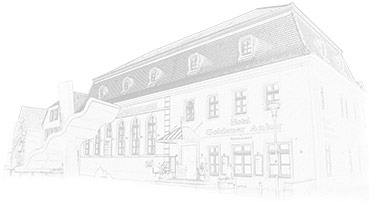 1558 – the oldest known owner, Ambrosius Thieme, dies. His widow, a married Dietrich, hands the Niederschänke over to Simon Nitzsche in 1562

1602 – after a frequent change of ownership or leaseholders, Simon’s cousin purchases the Niederschänke and owns it until 1630 and until 1632 the owner is J. Neander, of whom it was first leased in 1632 by a Martin Müller (Möller) and then bought in 1636 for 1200 gulden. He was the owner from the Müller family, in which the successors six times got the first name “Martin”.

1672 – the Niederschänke escapes the great fire of the village, because the owner took off the damp cloths from the women who came from the bleachery, covered the building with them and kept them moist

1724 – almost 50 years later there was again a great fire: this time the inn burned down completely

1742 – the landlord of the Niederschänke together with the brewing taverns of the Oberschänke and Naundorf participates in a lawsuit against J. G. Meißner, who served unjustified beer from Cossebaude and Oberwartha on the Liboriusberg near Wackerbarth’s Ruhe. But since the Kötzschenbroda judges and jury have called the beer of their own breweries as bad and untrinkable, the plaintiffs were not successful and Meißner continued his “Winkelschänke” at least until 1756

1756 – during the Seven Years’ War, the Niederschänke was leased by a Johann Christoph Uhlig, who at that time also took over the ship mill at the height of the Uferstraße

1765 – the Müller family moved in again and a Martin Müller leased the ship mill in hereditary leasehold, which gave him little joy, because there were quarrels over the “Mahlzwang” (obligation to grind) and the mill was destroyed four times in 65 years

1808 – a Dutch-built windmill was erected on the Elbe dam behind the Niederschänke, but it did not run properly, which is why it was raised by a few meters in 1865. Nevertheless, it was demolished a few years later: only about 150 days with sufficient wind in the year were too unprofitable

1848 – the era Müller in the Niederschänke comes to an end, the new owner is Karl Moritz Menzel

1860 – the name “Goldener Anker”(golden anchor) is mentioned for the first time, the exact date of the renaming is not recorded

1873 – the ship mill is abandoned, too. Due to the construction of the Elbe dam, the flow conditions had changed unfavourably, so the mill had to be anchored on the opposite bank, which in turn made the transport of grain and flour complicated

1900 – at the turn of the century, the restaurant is extended and rebuilt, the beautiful grand ballroom was built

1929 – in advertising a “washing and ironing room” appears, probably in an outbuilding, owner: Ernst Schöne

1955 – at this time, the restaurant is already closed and is used commercially by the HO (trade organization in the German Democratic Republic) and the company Tee-Schuhmann, mainly as a storage room. The VEAB (national acquisition company in the GDR) uses the large hall as a collection point and intermediate storage for grain of the local farmers at least till 1960

1960 – multiple changes of the use of individual rooms, the HO urges to build a sales outlet

The hotel in modern times

2002 – the “flood of the century” does not stop at the hotel. In addition to the underground car park, the water is also in the entire basement area and on the ground floor up to half a meter. The hotel had to close completely for three weeks and was then able to continue the operation only to a limited extent and with considerable impairments for the guests.

2013 – again, the hotel is not spared the flood, the basement and the beer garden are completely flooded. The hotel and restaurant business had to rest again for more than two weeks